TO TELL THE TROOF! 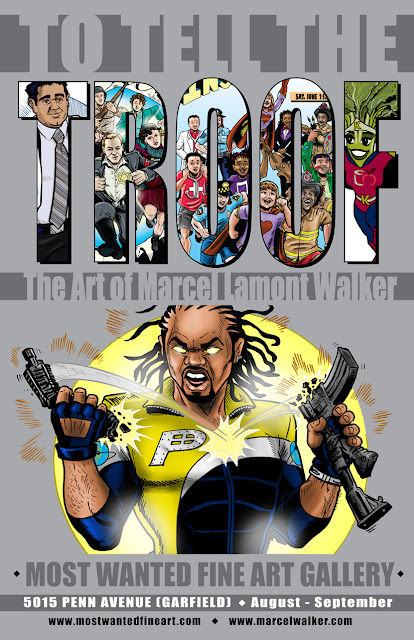 Last night, I had the distinct pleasure of being asked by Nick Marino to participate as a guest on the latest AudioShocker Sequential Underground podcast, which has gone live today. We spoke at length, covering lots of ground about intellectual property and litigation and how these matters pertain to independent comics creators. This was my very first time speaking on a podcast, and it was a lot of fun, and will hopefully be informative not just to comics creators, but anyone hoping to C.Y.A. when it comes to legal matters and their creations.

Just as a side note, I always find it funny when I'm asked to participate in more formal discussions like this one, and I'm able to tap into the areas of my brain that make me sound like I really know what I'm talking about! Mind you, I've had my fair share of experiences with litigating over comic-book properties (more on that in the podcast) so I like to think I know what I'm talking about. But there were a couple of times when Nick and Shawn posed questions that I responded to with answers far more eloquent than I would have presumed I was capable of.

And mind you, I love myself. So we'll chalk that up to Nick and Shawn's mad podcast skillz.

Anyway, go check it out!

I have a friend (in HERO CORP. he's The Man from Mars) who doesn't watch movie trailers. At all. He'll literally close his eyes in a movie theater, or go to the concession stand until they are over. He believes trailers influence your expectations of the actual movie so much, they typically ruin the final experience. I'm nowhere near as all-or-nothing as he is on this topic, but he's got a big point.

Most of my artwork is currently being channeled into issue two of H.C., and as every panel is finished there is a large part of me that wants to show it off immediately. It doesn't help that so many of the characters in the story are essentially me and my friends. They have no idea of how often I want to pick up the phone and say, "Guess what? I'm drawing you right now!" More than once I've received calls from friends as I was looking at their photo-references and drawing them. Yes, it's a little spooky.

I constantly listen to music while I work, as it helps to fill in the spaces when I'm not talking to myself, and to this end, Spotify is a wonder. (If you're not familiar with it, follow the link and check it out.) I have a sizable music collection of my own (nothing MASSIVE, but it's pretty far-ranging), and Spotify just allows me to expand on that, listening to whatever I want to listen to, whenever I want to hear it. For someone as mercurial as me, nothing better could exist.

But I've only been utilizing their Free version up until now, which is fine and wonderful...but it is limited. After six months you're only allowed x-number of playtime hours per week, and can only listen to any given song 5 times. And trust me, I'm drawing in my studio at least xx-number of hours a week, and will sing along to songs I like ad-nauseum. Seriously, you might not be able to hang with me when I get to liking something. It's pretty bad and good all at once.

Here's where the exploitation enlistment of my friends comes into play -- I would like you to be my heroes and sponsor my upgrade to a Premium Spotify account!

All I do anymore is draw. That's it. Seriously. And it's weird. And there's so much distracting stuff that happens while you're trying to draw, it's amazing that any drawing gets done at all.

I also just purchased a new Multi-Function Center (ooooooooo! aaaaaaaahhhh!), which is a fancy tech term for a copier/printer/scanner/fax machine. This is notable because in all the years I worked in print services, I've never owned a printer...'cause I never had to. AND this is my first scanner that allows me to scan ledger-size pages, so no more piecing together artwork in multiple scans for this cartoonist!

I actually want to write a long, rambling entry on these subjects, but I'm going back to the drawing table now. In the meantime, here's a peek at the thumbnail layout and pencils (which I scanned on my new scanner!) for the first page of issue 2.

Real quick before I go, I mentioned last time that I was gonna have a special request of some of you soon. I meant it, so stay tuned...I'm gonna let you in on a way you can help keep me even more inspired than you already do!

I'm not on sabbatical now, per se, but I do have time to work on the book and a new deadline, so we'll see how this comes together. The plan is to debut H.C.I. #2 (of 6) on May 5th, and I'll give folks a heads-up as to the where and when as the days draw closer. Suffice it to say, I'm at the drawing board again, and in many ways it's like I never left.

I actually started the preliminary work for this issue a while back, and kicked it into high gear last week by jumping back on my layout scroll. For those of you not familiar with this, I start most of my issues now by throwing a long roll of paper on the floor and blocking out the pages in black marker (highlighted with whatever else is laying near me). It looks like this when it's completed:

I actually started on this months ago at PIX (the Pittsburgh Indy-comics eXpo) where I was seated at an eight-foot long table, and was rather inspired for two days. Sitting down on the floor to pick up where I'd left off, I realized two things...

1.) I'm getting older. Sitting on the floor for extended periods of time? Used to be no big deal. Now? Cramp-inducing!

2.) It wasn't flowing as smoothly as last time. At least, not right off the bat.

I spend more time at this stage debating the arrangement of everything than I'd care to admit. The reason I started working this way was because of the free-form, stream-of-consciousness manner that the storytelling unfolded.  I could work in a straight line, or circles, or jump backward whenever I wanted. Stray thoughts and conscious decisions all had a place, and somehow the best ideas tended to make it to the next stage. Great, right?

Let's see who is still reading this...

For most of the last year my blog posting has been sporadic at best, but that's changing soon. I've been telling people that I'm going to have more free time on my hands by the end of the month (if you're at the epicenter of this news, you already know why; if not, be patient and all will be revealed soon), but that isn't necessarily so. I'll actually just have more time to devote to my artwork than I have in LONG time.

If I'm disciplined about it - and there's no reason I shouldn't be - that should result in a lot of artwork. Matter of fact, it's already being started. Here's how I spent the first couple of days of 2012, creating the wraparound cover for my media packet. Unless you're getting one, you'll only see it here for now: 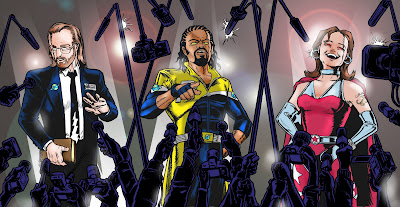 Much more to come folks, for real. But now, I gotta start getting ready for work. You know, the boring pay-the-bills kind.